Curious about creating an awesome paper cut effect in Procreate? We have got you covered! Today, learn to create a Lettering Cut Paper Effect in Procreate in 9 simple steps. Also, find bonus tips and tricks to ease out the process for you. Let’s get started! Learn the exact steps to draw an ampersand and other cool elements; you can apply this effect in any of your pieces.

Curious about creating an awesome paper cut effect in Procreate? We have got you covered! Today’s tutorial will teach you the exact steps to draw an ampersand and other cool elements; you can apply this effect in any of your pieces.

If you don’t know how to draw an ampersand, you can either use a font or get one of the 4 free ampersands we’ve also included in our Free Treasury which comes with a lot of other exciting freebies.

Today, learn to create a Lettering Cut Paper Effect in Procreate in 9 simple steps. Also, find bonus tips and tricks to ease out the process for you. Let’s get started!

TOOLS TO START THIS TUTORIAL

PS. If you don’t have our latest product “The Ultimate Procreate Background Set”, try out the Free Sample Set in our Free Treasury available for our awesome community newsletter subscribers.

Start by drawing the ampersand and add a color of your choice from the colors panel. You can use any Procreate Brush that allows you to draw a clean shape. We’d recommend anything from “Calligraphy” native brushes.

Feel free to draw whatever character you like the most. Absolute freedom at this point!

To create the elements,

Next, draw a butterfly.

Here’s a little tip: If you are using a smaller iPad, draw less of the elements, or else you’ll probably run out of layers. So, either keep it simpler or create a smaller document with a bunch of layers.

At this stage, you can decide which element goes on top and the bottom. For example, we are cutting these leaves short because we know they won’t show certain parts.

Small details make all the difference. Elements such as strawberry seeds and polka dots on the butterfly’s wings, all go on a different layer.

After creating your elements,

This completes this composition. For this tutorial, move leaves to the background followed by the other elements. Decide the order of all the elements at this stage, although you can change the order at a later stage too.

When some elements are partially behind the ampersand and in the front, it adds depth to the illustration.

This hides some parts element without erasing anything.

You’ll notice that the leaf starts showing but we’re actually not erasing the ampersand, just hiding it! Mask is an incredible tool, isn’t it?

Repeat the steps from above across the entire artwork.

Here’s a little tip: If you’re running out of layers, try joining the ones that are not touching each other.

Before adding textures, make changes to colors if you like. In this tutorial, let’s switch the ampersand’s color with the background’s color.

(PS. The names of the textures were updated after the tutorial was recorded.)

Here’s a little tip: Don’t choose a 100% black tone for shading, play around with dark colors until you find the one that suits you best.

If you don’t have the brush set, try out the free brush sample from our Freebies or use a soft airbrush from Procreate’s native airbrushing panel.

Next, duplicate the tiny elements. If you kept them in the same layer, grab the freehand selection tool, circle them, scroll three fingers down on the screen, and tap on duplicate.

If it was real paper, some cut shapes would bend a bit since we would work on it with our hands. So let’s try how to add this effect.

Add some light by following these steps,

Next, create the secondary lights,

The illustration is done! Time to add final touch-ups in the background.

Go back to the gallery and duplicate the document. Since we will join all the illustration layers, it’s always better to keep a copy of the hard work you’ve done.

To join layers start combining in groups pinching with two fingers as shown in the image below. Sometimes merging a bunch of them at the same time can get messy, so make sure you combine clipping masks with the object beneath first and then you can go faster.

Your illustration is just one layer! Now, do you remember the overall paper texture you had? Tap on it and make it a clipping mask. Now, this texture belongs just to the illustration. We’ll play later with the second texture we saved previously.

Next, add one of those not-too-obvious effects now. We don’t want the paper illustration to be sitting completely straight. So, select the transform tool again, tap on distort, and move the dot from the bottom left to the right. This will bring the shadow closer on one side and further on the other. It will look like it’s not sitting perfectly in the background and makes the illustration more realistic.

Now I’m setting this Layer to multiply by tapping on it in the layer’s panel. Bring the opacity down or up as you please.

Now head to that second background texture we saved before and bring it to the background. If you skipped that little step, feel free to add a new layer and spray a new texture. This will give 2 different textures to our piece (on your illustration and on the background) and will make the whole piece look more realistic.

Add a new layer, select a brighter color such as turquoise and spray some texture on the upper right side. Use an inverted brush from The Ultimate Procreate Background Set. Set this layer to Color Dodge, and you’re dooooone!

We really hope you enjoyed this and that you made some beautiful illustrations. You can always leave a comment or reach out to us on Instagram @jimbobernaus if you want to leave feedback or tell us if you would like to learn something particular. We would love to help you out!

We wish you a spectacular day with a taste of creativity. And now -  letter away!

Join our Newsletter Community, to get access to all of our freebies, including free Procreate Brushes, Textures, Fonts, and other fresh stuff!

Jimbo is a wannabe rockstar and letter fanatic

Here you can find FREE PROCREATE BRUSHES, FONTS AND TEXTURES.
THE TREASURY IS UPDATED EVERY MONTH! BE SURE TO SIGN-UP AND GET YOUR FREEBIES. 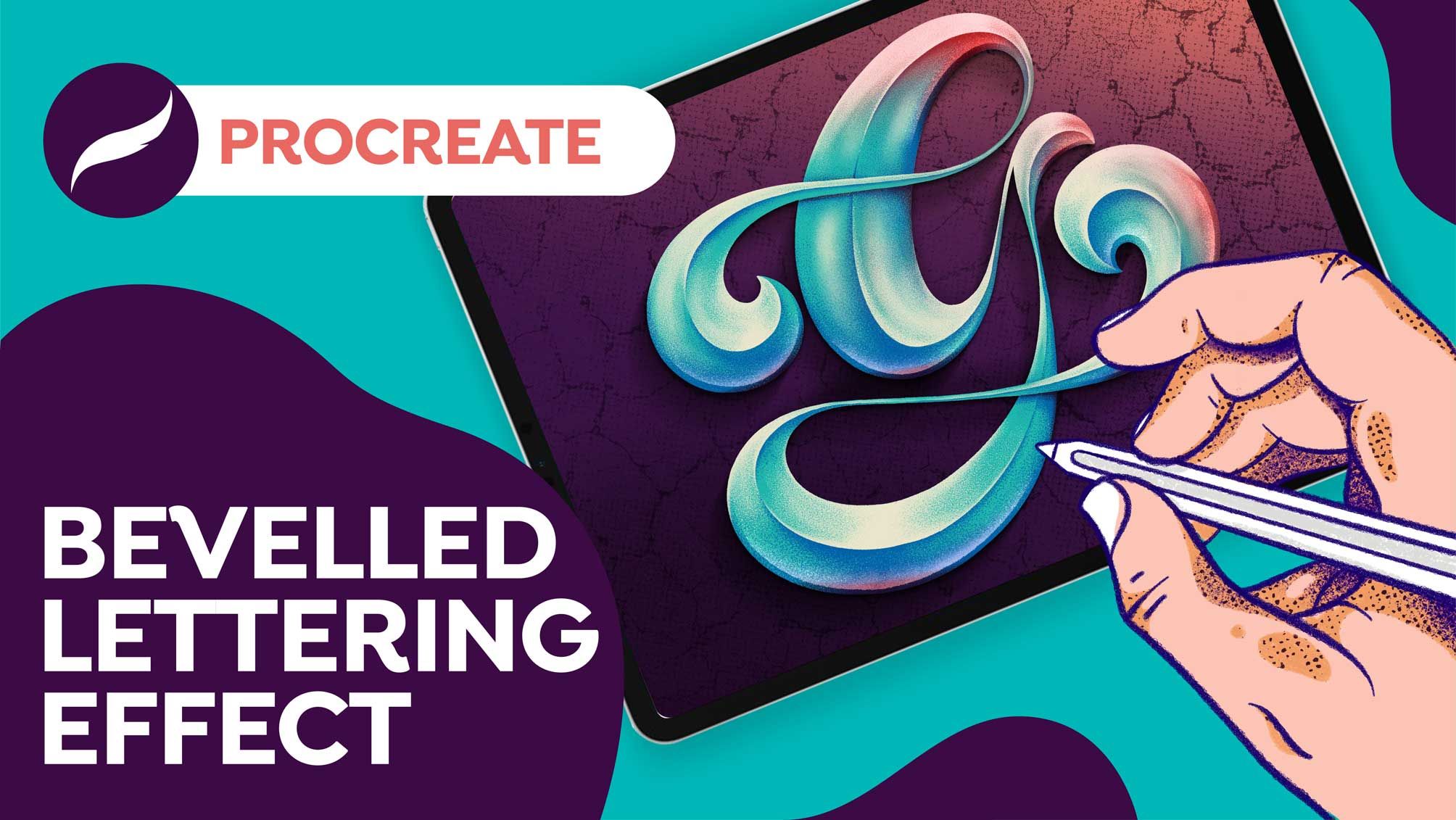 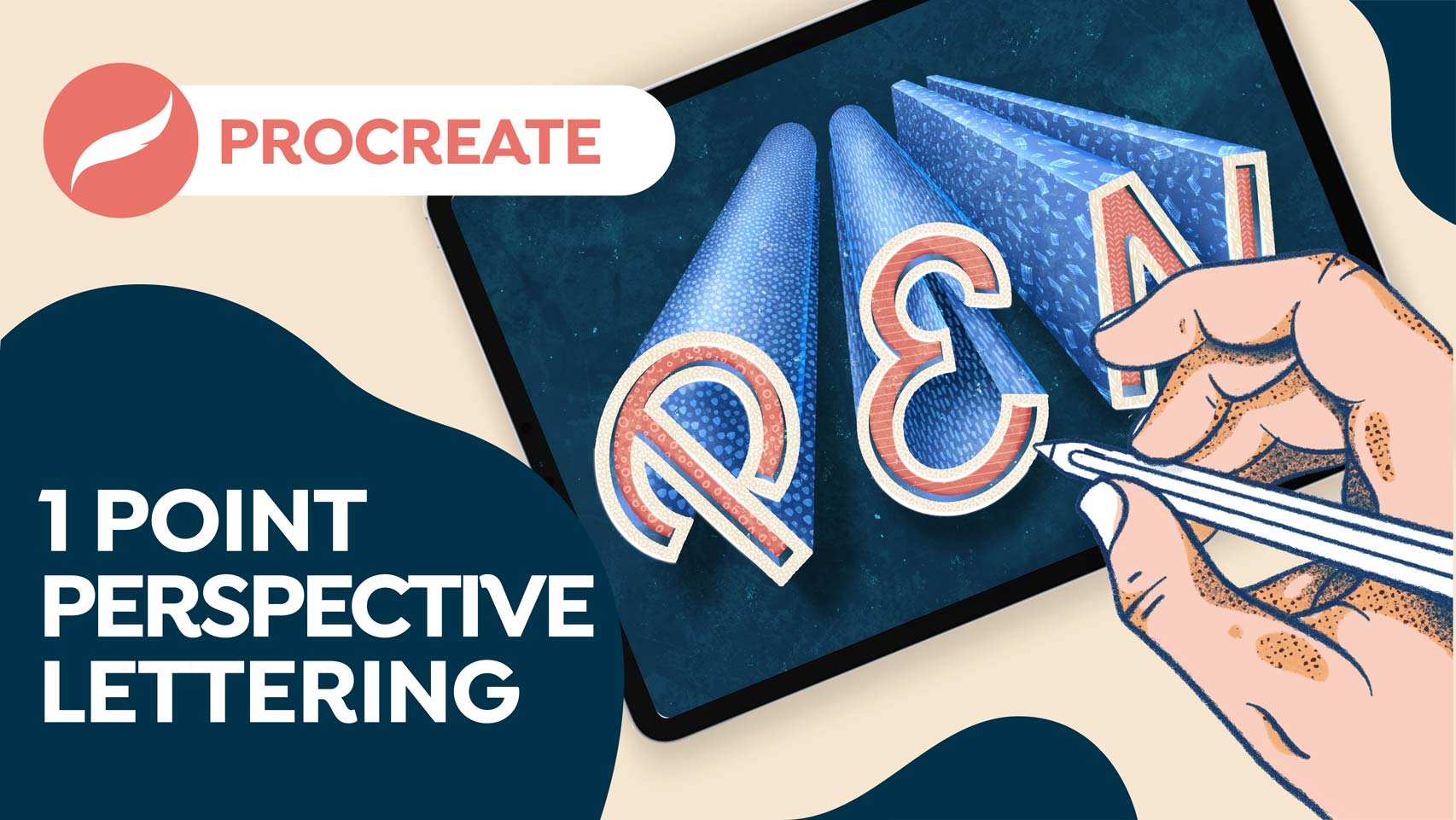 How to Draw 3D Letters Using One Point Perspective on Procreate 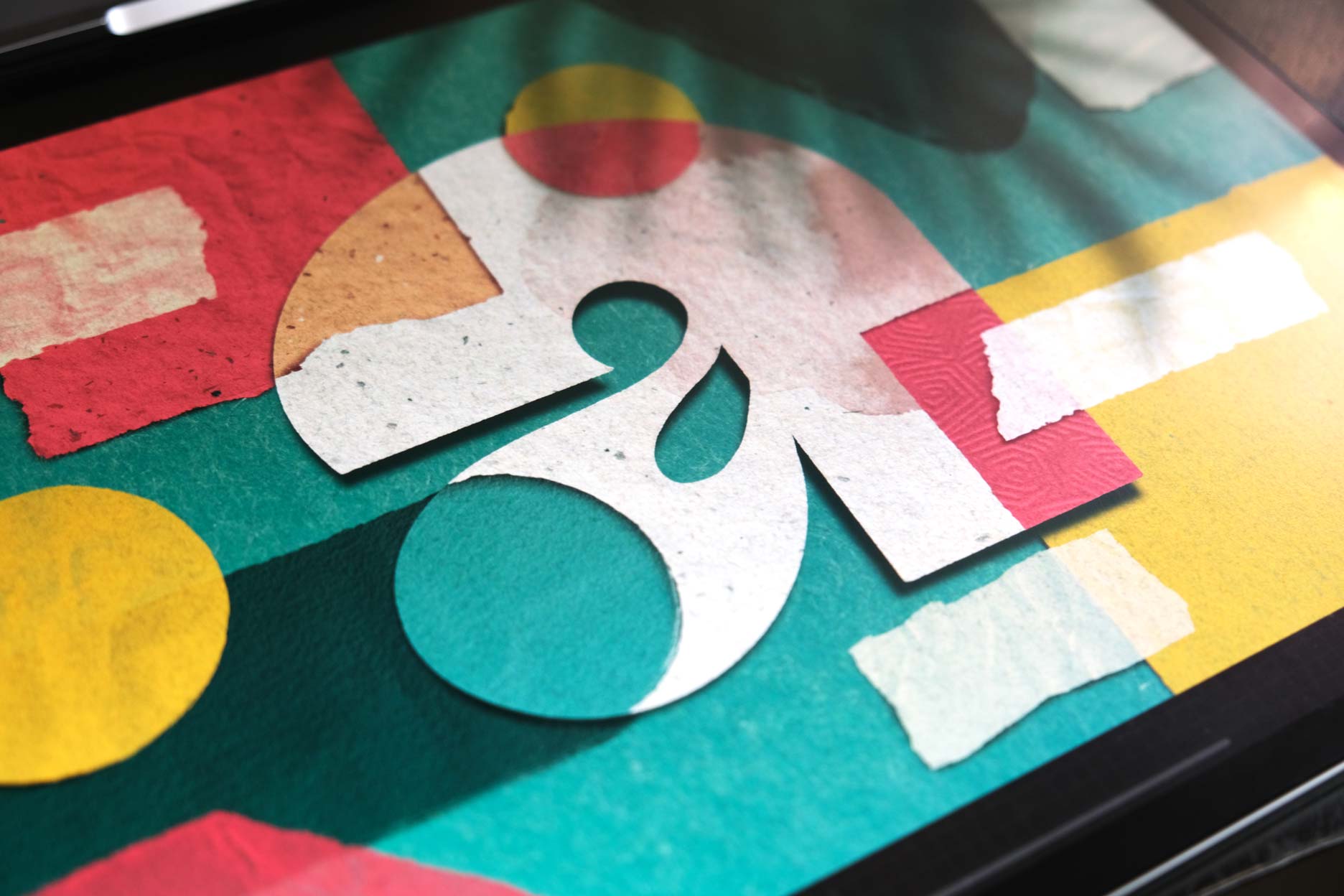